This Brown, Muslim-American Woman’s thoughts on ‘The Handmaid’s Tale’ 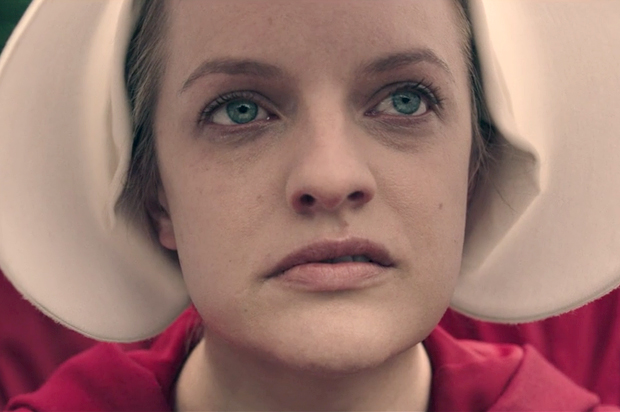 Last week, the streaming service, Hulu, premiered its “peak TV” series, The Handmaid’s Tale, based on Margaret Atwood’s 1985 novel.  Three episodes of the series are out (with new episodes released every Wednesday), and they are simultaneously haunting and terrifying. If you’re unfamiliar with Atwood’s novel, it is set in a dystopian future where the United States as we know it, no longer exists, and has been transformed into the republic of Gilead, a nation of white supremacist, Christian fundamentalists whose rule is premised on constant surveillance of its populace, where binary gender roles are fatally enforced, and where women who have two working ovaries are routinely raped so that they can bear the children of the infertile ruling elites. This national sterility being the obvious result of industrial and nuclear pollution.

Hulu’s series faithfully follows its source material, except for the white supremacy that undergirds Atwoods’ novel. I’ll get back to this point later. I’d like to first explore how the series’ framing of women’s power and agency (or lack thereof) via their biological function and the extreme fundamentalism of Gilead recall and reinforce some of the more damaging constructions of female Muslim  identity we’ve normalized because of our endless War on Terror. As George W. and Laura Bush both articulated after the 2001 invasion of Afghanistan, one of the reasons this action was so necessary–beyond retribution for the terrorists attacks on this country on September 11, 2001–was because we needed to save Muslim women from the tyrannical oppression of Muslim men who interpreted their religion in its most extreme form:

“”Afghan women know, through hard experience, what the rest of the world is discovering: the brutal oppression of women is a central goal of the terrorists,” Mrs. Bush said from Crawford, Tex., where she and President Bush are spending Thanksgiving.

”Civilized people throughout the world are speaking out in horror — not only because our hearts break for the women and children in Afghanistan, but also because in Afghanistan, we see the world the terrorists would like to impose on the rest of us,” Mrs. Bush said.”

Ostensibly appealing to Muslim women’s desire for dignity and self-determination, Mrs. Bush furthers the dehumanization of these Muslim women by claiming that they are nothing more than tools for either side in this “War” to deploy at will. In addition, she reminds the American people that such strict control and policing of women is barbaric not only because Afghani women suffer at the hands of the terrorists, but also (and more importantly) because women in the west might be made to suffer similarly. The ideological thrust of Mrs. Bush’s argument is not so much that Afghani women need saving–to be sure under War on Terror Culture all Muslim women need to be saved from their menfolk, from themselves, and from their religion by the enlightened West–but that American (white) women are in danger. That the terrorists end goal is the fair and pristine womanhood of the West.

Imagine, then, as a Muslim woman, my reaction as I watch The Handmaid’s Tale, where beautiful white women are forced to wear cloaks and headgear reminiscent of burquas and veils. Where these women must keep their eyes downcast and their voices low, lest they face physical danger from the state’s chastity police. Where terrorist attacks are the reason that Americans have agreed to give up their liberties and allowed the Constitution to be shredded. Where the slippery slope toward gendered slavery begins with women not being allowed to work, to own property, or to have access to their money without the approval of their closest male guardian. This might seem and is reactionary, but these are also the exact complaints we level at Muslim majority countries about their treatment of women. Make NO mistake, I am NOT condoning those nations or their restrictive and retrograde policies on gender. What I am pointing out, is that this show sees our hypocrisy, and reflects it back to us in important ways, at a time when we desperately need this reminder.

Which is why it is disappointing to find that the series buys into a colorblind, rather than intersectional model of identity in its casting choices and the deliberate decision undertaken by the creators to remove Atwood’s explicit references to the white supremacy underpinning Gilead’s regime. In an effort not to make a racist show (don’t even ask me to explain this), the EP claims that in a world so critically afflicted by decreasing birthrates, it made more sense that “fertility trumped everything.” While this might seem reasonable, current right-wing fears of our national demographic shift and the supremacy of western civilization, certainly suggest that bigotry and white supremacy are anything but reasonable. In a world where a woman is forced to undergo genital mutilation for being a “gender traitor” it’s both disingenuous and naive to suggest that “race traitor” is not a common pejorative. What is most egregious about the choice not to address racial differences or even racism, is that it leaves black characters like Moira (Samira Wiley) and Luke  (O-T Fagbenle) unable to respond with anything that seems realistic to the increasing xenophobia of their world. In fact, in a flashback set shortly before the current regime, the women are thrown out of the coffee shop in what looks like both a sexist and racist incident, yet by only focusing on gender, the show ignores the real history that accompanies the body of the actor inhabiting Moira’s character. How would she not think, wonder, or even consider that this attack might have been racially motivated? Of course she would, but the show can’t go there because of its apparent investment in a colorblind future, where gender difference is the only one that matters.

Yet, even this is mere lip service. We have only to look at the structural features of the show to see how white womanhood is being positioned not only in the narrative but also by the narrative. If this were truly a world devoid of white supremacy, would all of the wives of the commanders be icy blondes or pale gingers? We have only to look at the ruling elites to know that this is a mere fiction or paliative for those of us who demand some form of diversity from the entertainment we consume. Compounding this is the fact that other than Moira, the other black and brown bodies are both scarce and light-skinned. They feed into a color-based hierarchy that locates desirability at the top, with whiteness. In fact, if “fertility [did] trump everything,” then I suspect that we would see a lot more brown people than we do. It’s not as though there is evidence that white women are more fertile than others. At the very least we would see equal distribution of races within the ranks of the handmaids. Finally, the lingering and loving gaze of the camera lets us know how much the narrative is invested in white suffering and white pain. We are treated to long close-ups of delicate white faces forced to wince and blink at unspeakable atrocities. It is their pain we are asked to witness and with which we should identify. In the third episode, “Late,” we are shown the horror of Ofglen’s (Alexis Bledel) captivity, trial, and judgment by the camera’s focus on her very large and very blue eyes. They express fear, terror, and rage, and the camera is there to catch every emotion that flits across her face. We are asked to identify with the suffering of these women on a fundamental level, on a universal level, and on a human level. However, as bell hooks reminds us in “The Oppositional Gaze,” an essay I routinely assign to my students,

“Black female spectators have had to develop looking relations within a cinematic context that constructs our presence as an absence, that denies the “body” of the black female so as to perpetuate white supremacy and with it a phallocentric spectatorship where the woman to be looked at and desired is “white.” […] Even when representations of black women in film were present, our bodies and being were there to serve–to enhance and to maintain white womanhood as the object of the phallocentric gaze.”

hooks indicates that the “looking relations” that black women develop are rooted in opposition because they are not invited to identify with either the female subject because of race or with the patriarchal gaze of the camera. This was my experience of watching The Handmaid’s Tale, while I could be horrified by the degradation, rape, and abuse these women endured and sympathize with their situation, I was acutely aware that this horror was supposed to be especially horrific and traumatic because white womanhood, and not black and brown womanhood, was at stake, endangered, and would heroically save itself. What likewise gratified me was that the abuser was not black or brown, but white, and that its violence was as white and American as apple pie.