Marjane Satrapi’s searing graphic memoir Persepolis continues to remain controversial and relevant over 15 years after its publication in North America. The memoir follows the childhood trauma endured by Satrapi as she came of age during the student–and then– Islamic revolution in Iran in the 1970s. Satrapi depicts the changing fortunes of her family as they experience the changing cultural, political, and religious landscape of Iran. As she notes in the preface to the North America edition, the aim of this book is to humanize Iran and its people in the face of increasing American and western antagonism: “I believe that an entire nation should not be judged by the wrongdoings of a few extremists. I also don’t want those Iranians who lost their lives in prisons defending freedom, who died in the war against Iraq, who suffered under various repressivs regimes, or who were forced to leave their families and flee their homeland to be forgotten.” Satrapi’s narrative is not only successful in its stated goals, but also offers an important intervention in our current War on Terror culture, which seeks to demonize people from countries like Iran.

It’s disheartening, then, to find that there’s an online petition to ban Persepolis from being taught in classrooms in one California school district. As someone who has taught Perspolis a number of times in my freshman writing course at Harvey Mudd College, I’ve found the graphic novel particularly useful in facilitating cross-cultural dialogue. My students routinely list the graphic novel as one of their favorite readings from the course, and identify with the plight of young Marjane as she navigates the rapidly changing and terrifying familial and political landscape. I’m therefore quite troubled not only by this petition and the signatures its garnered, but also by the superficial criticism that’s being offered for banning this important book. Those who support removing Persepolis from classrooms either haven’t read the book or haven’t read it closely enough, because the charge of Islamophobia being lobbed at it is patently false and a deliberate misreading of the text. 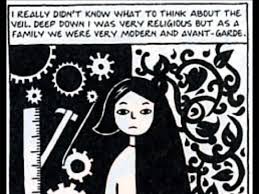 As a Pakistani American Muslim woman, I do not condone or endorse Islamophobia, and I understand that young people coming of age now have a schooling experience that is quite different from what my experience was. Nonetheless, banning a book because it offers a nuanced and critical view of the events of the Iranian revolution and the religious repression that followed is not Islamophobic. It is history. Moreover, the claim that any text that is critical of specific political or religious practices that might also then be Muslim, is also not Islamophobic. As Muslims it’s our obligation to be critical thinkers, not to claim that any critique of political regimes that use and misuse our religion is Islamophobic. It’s also our duty to understand that even as our experiences as Muslims in a world consumed by the War on Terror might be similar, our community is not monolithic. We are from discrete and distinct cultures. We are 1.6 billion people who have different ethnicities, languages, customs, mores, and values. What Satrapi offers is her reality of growing up during the turbulence of the revolution. The repression she experienced was real. The religious mandates that changed the customs and lifestyles of the people was real. Indeed, it is that same repression that we are critical of when we side with the women of Iran now in their quests to have autonomy and throw off the chowdar if they choose. It’s this same repression that we critique when we side with Saudi women in their quests to drive and to run for office. It’s our critically informed understanding that religion can be used to oppress but that doesn’t mean that we discard the value of religion or that we endorse negative feelings, emotions, or actions against those who belong to that religion.

When we have a government that has been fighting its War on Terror in majority Muslim countries for over 17 years, and an administration that is very much interested in expanding its theater of war to Iran, given its choice of Secretary of State, it’s vital that we continue to teach and read Persepolis. This graphic novel remains important not only because it exposes the lives, the fears, the desires, and the humanity of people that we have so easily demonized, but also because it serves as a cautionary tale. It shows us what happens when repressive and fundamentalist readings of religion are combined with political power. It offers us a mirror into our own lives and politics.

View all posts by Ambereen Dadabhoy

2 thoughts on “Banning Persepolis is not how we defeat Islamophobia”