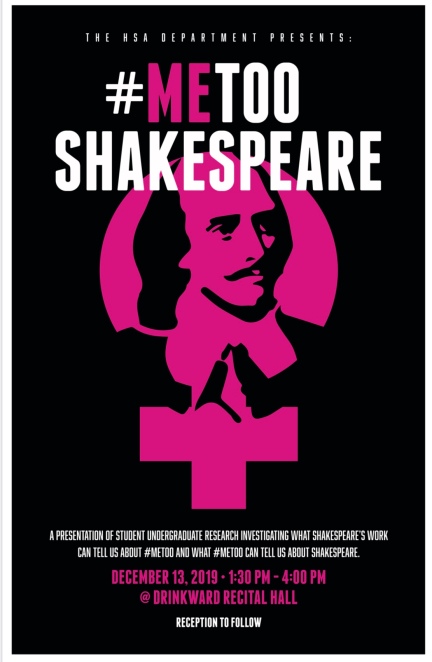 On Friday, December 13, 2019, my #MeToo Shakespeare course at Harvey Mudd College culminated in a conference where my undergraduate students presented their research. The conference was a perfect encapsulation of the critical investigation we had undertaken over the course of the semester. This work entailed examining what Shakespeare’s plays might tell us about #MeToo and, importantly, how thinking through this moment and contemporary intersectional feminist theory allows us to gain a more critical understanding of Shakespeare and his works. In many ways, this course was a challenge to the so-called universality of Shakespeare’s plays, not with an aim to dislodge Shakespeare’s position at the pinnacle of high culture, but to nuance that positioning, to note that this high culture is white, western, heterosexual, and patriarchal. In no way was this meant do diminish Shakespeare, his cultural capital being assured by his preeminent global status. It was, indeed, to see how these powerful scripts continue to exert their influence by authorizing acceptable modes of behavior and conduct for men and women, and the ways of disciplining those identities, particularly women, that transgress their acceptable social locations. 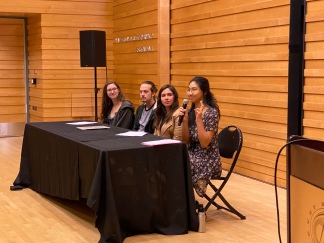 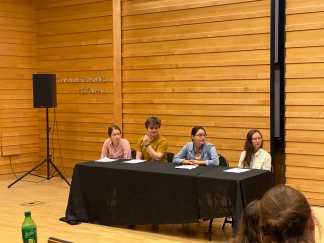 Over the course of the semester, we read five plays that seemed to take up, either directly or tangentially, the issues that underpin #MeToo: Titus Andronicus, The Taming of the Shrew, A Midsummer Night’s Dream, Much Ado About Nothing, and Measure for Measure. In one form or another, each of these plays depicted gendered and sexual violence against women and each manifested a deep anxiety about women’s agency, usually located in women’s unrestrained speech. I paired Shakespeare’s plays with secondary criticism and theory that demonstrated early modern social structures and hierarchies, forms of patriarchal control, the cultural logics animating the marriage plots of the comic genre, feminist interventions or challenges to patriarchy, and black feminist theory’s own opposition to how white or mainstream feminism constructs the struggles that women face. It was very important to me that my students pay close attention to the specifics and particularities of the identities they were examining, so as not to conflate under the rubric of “woman” all racial and classed positions. Beginning our inquiry with Titus Andronicus helped us do that because the cultural, racial, and classed locations of the play’s two important women, Lavinia and Tamora, uncovered the two poles informing the work: the world of Rome and that of the one outside of its so-called civilized and civilizing boundary. Pairing this play with Francesca T. Royster’s brilliant article, “White-Limed Walls: Whiteness and Gothic Extremism in Titus Andronicus,” showed my students very clearly how whiteness gets constructed and articulated in this play. Indeed, the genius of Royster’s analysis lies in her critical attention to the hyper-whiteness of Tamora and the contrast is character and civility this instantiates with Lavinia and Rome. Rather than limiting her focus to the “obvious” Other in the play, Aaron the Moor, Royster shows us how to see race in whiteness, making a necessary intervention in early modern critical race studies by disturbing the apparent unmarked, unremarkable, and therefore unraced nature of whiteness. Introducing my students to Royster’s work and the work of Black feminist scholars early in the semester, allowed their exporation of these text to be inflected by a critical consciousness attuned to the ways in which whiteness works in Shakespeare’s texts, especially when it is yoked to women and virtue. 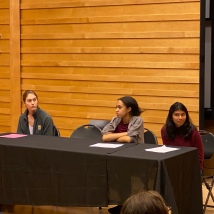 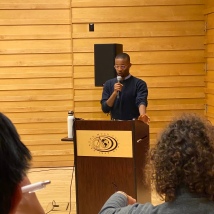 Attention to the complex ways in which identity is formed in Shakespeare’s plays is important to my pedagogy and was especially important in this course where all but one of our plays was a comedy, a genre that culminates in marriages that secure social class, heterosexual relations, and patriarchal power. Race is a particularly insidious discourse in the genre, its mobilization supports power structures governing the plays, exposing the ways in which both whiteness and non-whiteness are structured. As we moved to A Midsummer Night’s Dream, near the middle of the semester, my students had become more adept at identifying how even minor instances of racial Othering, seemingly unimportant racial references, exerted power in rendering women suitable or unsuitable for marriage. Their reading of Kim F. Hall’s Things of Darkness informed their astute observations. This text, of which I only assigned the introduction, exposed them to the racial regime undergirding early modern notions of beauty, particularly as it manifested in the discourse of fairness and its primacy of place in securing appropriate dynastic alliances through marriage. In her introduction, Hall points out that scholars have been reluctant to investigate the operations of race when Lysander spurns Hermia with the epithets of “Ethiope” and “tawny Tartar,” and then proceeds to expose how these moments perform the work of white, racist, imperialist, enslaving, hetero-sexist, patriarchy. Because, as Hall argues “black women–real or rhetorical–are coded as the ultimate in undesirablity and thus are not suitable objects of societal exchange […] [n]one of the women marked with the language of blackness are at that moment desired partners in marriage” (22). Using Hall’s powerful insights to structure our own inquiry into this and other plays, my students found that in Much Ado, when Hero is rejected by Claudio, her father, Leonato uses the language of inking or blackening to racialize and render her not only unchaste but also unsuitable for marriage. These moments demand our critical attention because they speak to the hierarchies and forms of cultural dominance established by racist and patriarchal systems and of the hierarchies and dominance within the oppressed category of woman. All women are not the same nor are all forms of oppression. Keeping that in mind was necessary for us to think about which women are supported when they publicize the harm done to them and which are not, who can be an “appropriate” victim and who cannot, who can “we” identify with and who can or do we not.

Another theoretical approach undergirding our inquiry in this course was contemporary feminst theory, especially the work of feminist philosopher Kate Manne. In her book, Down Girl, Manne speaks to our current social and political moment, one where women have made great strides in a multitude of arenas, and yet continue to be disciplined by various modes of patriarchal control. My students overwhelmingly responded positively to Manne’s work, almost to a person citing parts of Down Girl in their conference presentations. What was particularly effective in this text was how Manne’s clear definition of misogyny, which moved beyond the “naive conception” of it as “primarily a property of individual agents who are prone to feel hatred, hostility, or other similar emotions toward any and every woman, or at least women generally, simply because they are women” to misogyny as a “political phenomenon,” where in it is a “system that operates within patriarchal social order to police and enforce women’s subordination and to uphold male dominance” (32-33). By exposing the system of misogyny, Manne is able to identify a constellation of “hostilities” that “police, punish, dominate, and condemn those women who are perceived as an enemy or threat to the patriarchy” (34). Manne’s book offered us a primer of a sort, a theory, grammar, and vocabulary through which we could identify misogynistic values and behaviors while also identifying the pernicious operations of patriarchy. I might, at this juncture be called out with the charge of introducing anachronism into our study of Shakespeare; however, as we discovered over the course of this semester, patriarchy and misogyny do not belong solely to the past or to the present: they like all regimes of power, change and adapt to suit specific contingencies. While the examples that Manne rehearses are rooted in our contemporary moment, we can easily find similar examples of type and scale in our Shakespearean sources.

Let me return, then, to the highlight of our semester: our conference where my students presented their research publicly. Part of this assignment was to present their research to a non-specialized audience, to make it accessible to the public, and to draw connections between #MeToo and Shakespeare that did not privilege the epistemological position of our playwright. This is important to me because I am not one who believes in Shakespeare’s universalism, even as I taught a course that might seem to suggest just that in its title. #MeToo Shakespeare was as much about how Shakespeare’s scripts might be opened up through the lens of #MeToo as it was about what Shakespeare could tell us about sexual and gendered violence. To that end, my students presented, what I would call graduate level work, on this topic. Their papers ranged from distinguishing between patriarchy and its specific manifestations, to women in power and politics, to shame and rape culture, to various forms of misogyny such as objectification, negging, and grooming, to personal experiences of gendered and sexual violence, to satirical analyses of romance conventions and genre, and finally to race, identity, and victimization. While this was a conference of undergraduate research undertaken by students who are not majoring in English or Literature, their presentations were incredibly rigorous, poised, and polished. They fielded difficult questions during the Q & A like professionals. I was and am so proud of them for the work they put into the conference and over the course of the semester. This is the first time I’ve organized a capstone project of this kind, and I am fully aware of the work-place privilege I have in holding such an event. I teach at a SLAC, where I have funding and resources, teach small  seminars where a one day conference with 13 student papers was possible, and have incredibly bright students who put in the time to perfect their writing. I do believe, however, such capstone projects, whether in person or online via a web archive of student work are valuable because they communicate our intellectual labor to a wider audience and to all of the students in the course. As I talked with students during the reception, what I heard most often was how wonderful it was to listen to the other papers, to see the different ways everyone approached the topic, and to know that collectively they had produced something important. That is what we hope for in our teaching: that our students will have been excited by our subject and that they will think about this work after they’ve left the classroom. This course was a wonderful experiment that exceeded all of my expectations. I am privileged to have amazing students willing to take a chance on it, Shakespeare, and me. 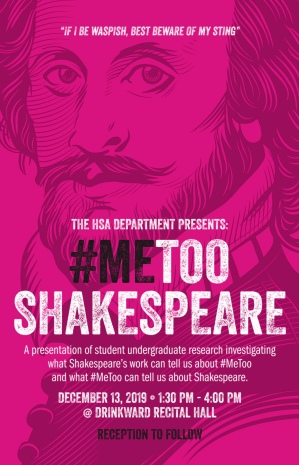 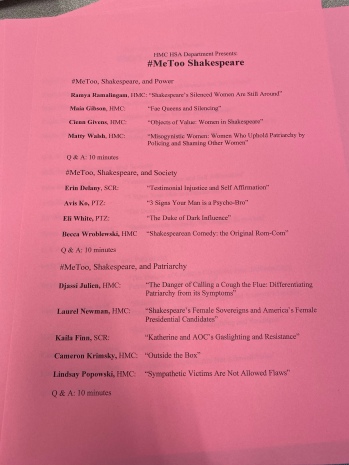 View this document on Scribd

View all posts by Ambereen Dadabhoy